JANET HAMILL was born in Jersey City, NJ.  For her first five years, she gazed across the Hudson from the Palisades in Weehawken before her family moved to New Milford in Bergen County.  She attended Glassboro State College (now Rowan University) in south Jersey, where she earned a BA in English.   After graduation, she made New York City her home base, interweaving jobs in bookstores with travels across the U.S.A. and down into Mexico.  She took a freighter across the Atlantic and travelled through southern Europe, Morocco, Egypt, Sudan, Ethiopia, Kenya, and Tanzania.  Upon her return, Janet’s first book of poetry was published in 1975.  Troublante (Oliphant Press), was followed by The Temple (Telephone Books), Nostalgia of the Infinite (Ocean View Books), Lost Ceilings (Telephone Books), Body of Water (Bowery Books), Tales from the Eternal Cafe (Three Rooms),Knock (Spuyten Duyvil) and Real Fire (Alexandria Quarterly Press).

Her work has been nominated for the Poetry Society of America's William Carlos Williams Prize and the Pushcart Prize. Tales from the Eternal Cafe, her first collection of fiction, was named "One of the Best Books of 2014" by Publisher's Weekly.

​Her poetry and short fiction has appeared in numerous anthologies and journals including Resist Much, Obey Little, InFiltration: An Anthology of Innovative Poetry from the Hudson River Valley, Up Late: American Poetry Since 1970, The Low-Tech Manual, Living With the Animals, The Unmade Bed, Deep Down: The New Sensual Writing by Women, Bomb, City Lights Review, Alexandria Quarterly, New Wilderness, The World, Recluse,  Cafe Review, Poetry Flash, and the Hart Crane Newsletter.

A strong proponent of the spoken word, she has read at The Poetry Project, The People's Poetry Gathering, The Knitting Factory, The Andy Warhol Museum, Central Park Summer Stage, as well as other venues across the US, in Ireland and England.  In collaboration with the band Moving Star, she's released two CD's of spoken word married to garage rock:  Flying Nowhere and Genie of the Alphabet.   Her poem "A Thousand Years"  was set to the music of contemporary Irish composer Ian Wilson.  Under the title "How Goes the Night,"  it premiered at Symphony Space in November 2018.

​She received her MFA in Creative Writing/Poetry from New England College in 2014.

Janet presently resides in NY's Hudson Valley where she serves as director of Megaphone Language Arts at the Seligmann Center in Sugar Loaf, NY. 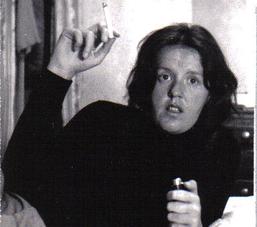